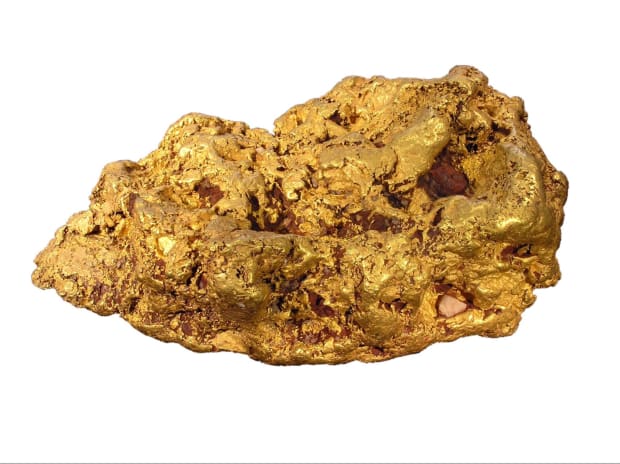 While alternative cryptocurrencies may on the outside be shiny and attractive, they lack the fundamental aspects that give bitcoin value.

And she’s buying a stairway to heaven”

“Fool’s gold” is a common nickname for pyrite. It got this nickname because it’s practically worthless, but it has a look that deceives people into believing it’s real gold. With a little practice, there are many easy tests anyone can use to quickly tell the difference between pyrite and gold. The nickname “fool’s gold” has long been used by gold buyers and prospectors who were amused by enthusiastic fools who thought they had found gold. The ignorance of these fools caused many of them to lose their savings and fall into poverty.

Does it sound familiar? Well, if bitcoin is digital gold, it’s only natural that there is also a digital version of fool’s gold — that is, shitcoins.

Gold is found in nature mainly as nuggets in some river sediments or, to a lesser extent, embedded in rocks. Its name comes from the Latin aurum, which means brilliant. It is a dense, malleable, ductile, bright yellow metal that does not react with other chemicals or oxidize (it does not rust).

Due to these characteristics of brightness and no chemical change, gold has always been considered precious by humans, being used to mint coins by major cultures. As it is a soft metal, it must be hardened to be used and is often mixed with silver and copper to form stronger metal alloys. The fact that gold is malleable allows it to be used for jewelry, as it is possible to mold it without breaking it. Gold is also used in the electronics industry and as a store of value. Gold is scarce, which contributes to its high valuesince humanity values ​​scarcity.

Fool’s gold, as pyrite is informally known, does not have any of gold’ main characteristics other than the bright yellow color. Pyrite is not composed of any precious metal, but rather is a mixture of iron and sulfur, forming an iron sulfide. The color and brightness of pyrite resembles that of gold and can deceive beginners and the most naive, but the similarities stop there. Unlike gold, pyrite has square or hexagonal features and reacts with other chemical elements or when heated, usually giving off a characteristic sulfur dioxide smell (rotten eggs). Pyrite, despite its similar coloring to gold, cannot be used for jewelry, as it is not malleable like gold, but rather brittle. Pyrite is also an abundant mineral and was first called fool’s gold in the California gold rush, when less-experienced miners believed this yellowish, shiny material was real gold.

In the mining industry there are two categories of minerals: ores, which are the material of economic interest, and gangue mineral, which is material with no commercial value that needs to be separated from the ore. By definition, gold is an ore while pyrite is a gangue mineral. In this way, it is dangerous to believe that “all that glitters is gold,” like the lady in “Stairway to Heaven.”

Bitcoin is popularly known as digital gold because of one of its main characteristics: scarcity. Bitcoin is scarcer than gold itself, as its offer is inelastic. In addition to absolute scarcity, Bitcoin also has several characteristics that are irreplicable by other cryptocurrencies, such as being the only truly decentralized blockchain (and therefore the only censorship-resistant blockchain), being by far the network with the most computational power and having an immaculate design (without pre-mined tokens and no advantages for the “king’s friends”), besides having a gigantic network effect.

Alternative cryptocurrencies, also known as altcoins or shitcoins, have none of these characteristics. Like pyrite, shitcoins are not scarce and there is an unlimited supply of similar and generic projects. Shitcoins aren’t decentralized either. Clear examples of this are the participation of Vitalik Buterin in Ethereum and Charles Hoskinson in Cardano. Or more generally: any coin that has a known founding team is not decentralized enough, as these coins are not immune to enforcement and blackmail, meaning they can be turned off, for example, if someone threatens family members of key participants of those teams.

Decentralization doesn’t just mean running on an independent network, but also means that ordinary users should be able to validate the network themselves. In Bitcoin this is possible and the cost to run a full node is low (less than $200 in total). On the Ethereum network nodes can be run on Amazon Web Services (a centralized company) and the cost is around $175 monthly ($0.243/hour). In Ethereum 2.0 (a major update that might come off the paper someday), users will need to have at least 32 ETH to be able to run a validator node, which at current prices means almost $110,000 to be able to validate the Ethereum network.

The Race For Digital Gold

As with the California gold rush, there are now thousands of coins trying to attract the most naive. These are people who still don’t understand the irreplicable characteristics of Bitcoin and naively seek to find “the next Bitcoin.” After all, “it’s easier for this shitcoin to go from $1 to $2 than for bitcoin to go from $50,000 to $100,000,” or so their flawed thinking goes.

And just as with physical fool’s gold, this misunderstanding of the qualities that make digital gold truly valuable does and will continue to cause people to lose their savings.

But then, how do you know if a particular cryptocurrency is a digital fool’s gold?

Are there any known founders?Is there a marketing team trying to sell this coin?Is it possible to run your own node at low costvalue or can only the very rich can validate this blockchain?Are there coins that were pre-mined and distributed to founders or early investors?Are there people with privileges on the network who can validate transactions for the simple reason that they have more of the cryptocurrency than others (or, in other words, whoever has more can do more)?

If the answer to any of these characteristics is yes, beware: this coin is not digital gold.

As with gold, Bitcoin’s characteristics are also irreplicable. There will never be another cryptocurrency with the same network effect, computational processing capacity, resistance to censorship derived from true decentralization and all starting from an immaculate conception.

But some fools haven’t figured it out yet, which makes them an easy target for shitcoin scammers.

This is a guest post by Pudim. Opinions expressed are entirely their own and do not necessarily reflect those of BTC Inc or Bitcoin Magazine.