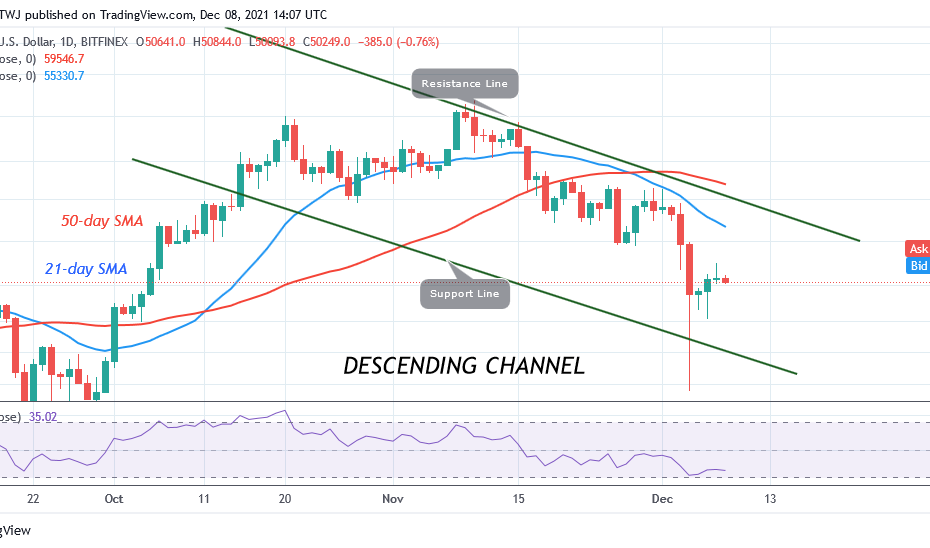 After December 4 price spike, BTC/USD has been fluctuating above the current support as Bitcoin holds above $47K. In a nutshell, Bitcoin is trading marginally as price fluctuates between $47,000 and $52,000 price levels. The bottom line is that Bitcoin is prone to decline while trading in the bearish trend zone. Today, BTC’s price is trading at $49,133 at the time of writing.

Following the bearish impulse on December 4, Bitcoin bulls bought the dips and held back the bearish run. For the past five days, BTC’s price has been holding above the $47,000 support. Yesterday, buyers pushed BTC’s price to the high of $51,970 but could not sustain the bullish momentum. Today, the cryptocurrency is retracing after retesting the $52,000 resistance zone. BTC’s price is expected to retrace to the support above $47,000. In other words, the cryptocurrency will be range-bound between $47,000 and $52,000 price levels for a few days. Bitcoin will trend upward if price breaks above the $52,000 resistance level. In the same vein, if price breaks below the $47,000 support, the market will decline to $41,000 support.

Ether Is a Superior Store of Value to Bitcoin

University researchers in Australia do not agree that Bitcoin (BTC) is the best store of value than Ether (ETH). They believe that Ether (ETH) is on track “to becoming the world’s first deflationary currency.” The report highlights the merits of EIP-1559 as a tool for making ETH a deflationary cryptocurrency and potentially a better store of value than Bitcoin. The EIP-1559 upgrade in August saw the network burn a portion of transaction fees. Also, more than 1 million ETH has been burnt from the 118,583,580 circulating supply.

According to the report, as the demand for Ether increases due to its robust ecosystem of decentralized finance applications, more ETH will be burnt. The findings have shown that Ether is already less inflationary than Bitcoin. According to the researchers: “Annualizing the rate of Ethereum creation since EIP-1559, the expected increase in the total Ethereum supply is only 0.98%, being less than half the 1.99% increase in Bitcoin supply which is almost certain in the same period.”

Meanwhile, Bitcoin is in a range-bound move as Bitcoin holds above $47K. BTC price is falling and testing the lower price range. On November 27 downtrend; a retraced candle body tested the 78.6% Fibonacci retracement level. The retracement indicates that BTC will fall to level 1.272 Fibonacci extension or $49,528.20.